Skip to Main Content
It looks like you're using Internet Explorer 11 or older. This website works best with modern browsers such as the latest versions of Chrome, Firefox, Safari, and Edge. If you continue with this browser, you may see unexpected results.

Learn how to create Quick Reports and Crosstabs in MRI-Simmons Insights.

How to Interpret Crosstab Data

Crosstab showing survey results for adults who said Dunkin' is the fast food restaurant they visit most often (column), by Generational group (rows). 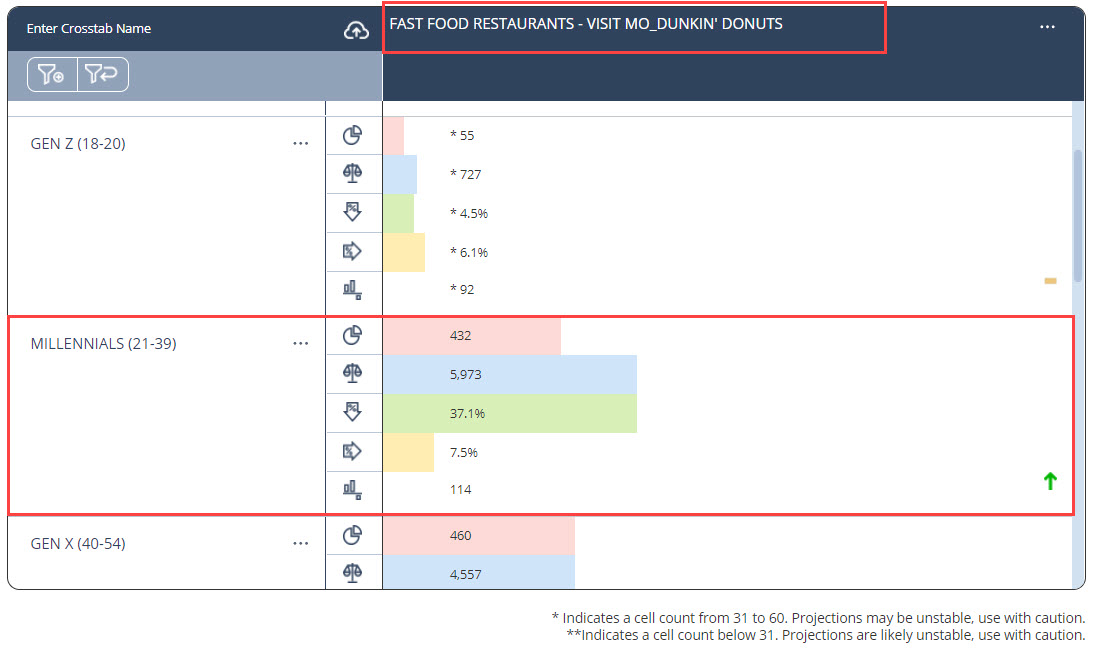 Sample: The number of people surveyed who meet both the column and row criteria

There are 432 Millennials who responded that Dunkin' is the fast food restaurant they visit most often.

Vertical %: Percent of the column reached by the row. [Read vertical percent by starting from the top, then down to the vertical percent, then left to the comparable variable in the row].

Of those who visit Dunkin' most often, 37.1% are Millennials.

Of Millennials, 7.5% of them visit Dunkin' most often.

Index: The likelihood of the target to meet a specified criterion, expressed in relation to the base, where 100 = average. (Index can be applied either column to row, or row to column). The numerical difference from the average is expressed as a percentage of being more likely (numbers higher than 100) or less likely (numbers lower than 100). In this example, 114 - 100 = 14, so 14% more likely.

Millennials are 14% more likely to visit Dunkin' most often than the U.S. 18+ population overall.

Those who visit Dunkin' most often are 14% more likely to be Millennials than any adult 18+.

Small Sample Size Cautions: In some instances there may be small sample sizes for various targets, which result in projections that may be unstable. These are indicated by a single or double asterisk (* or **) in the crosstab. Usage of data points indicated as having a small sample is not recommended.

In this example, note the * next to each number in the Gen Z row, which indicates a cell count from 31 to 60.